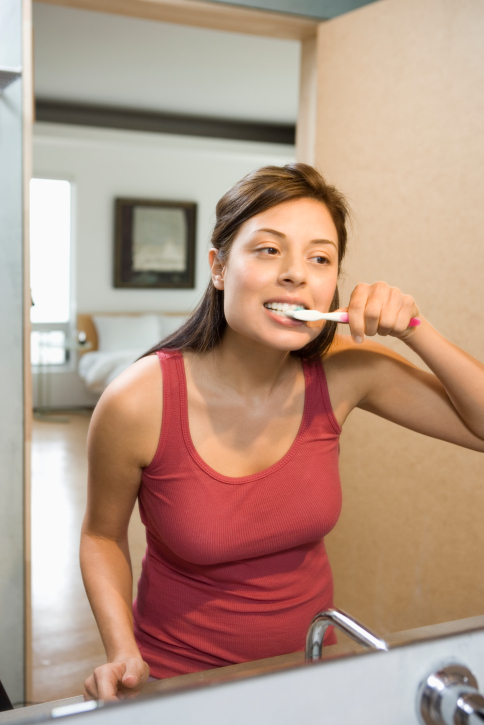 Most people practice it twice daily – once before bed and again after getting up in the morning – for an average of one minute and fifty-two seconds. These are just a few of the finding on tooth brushing from the Delta Dental Oral Health and Well-Being Survey.

Nearly 70 percent of Americans brush their teeth at least twice day, the number recommended by the American Dental Association and dentist everywhere. However, that still leaves 30 percent of the country’s population as not brushing enough, states researchers involved with the study.

Based on the data collected by the Delta Dental survey, 91 percent of Americans brush at home in the bathroom while standing over the sink. No surprise there. However, 4 percent of survey respondents said they brush in the shower. Americans between the ages of 18 to 44 are actually twice as likely to brush in the shower. (Lets hope the don’t toothpaste in their eyes.)

Perhaps most disturbingly, the study found that 0.2 percent of Americans actually brush while driving. Talk about distracted driving.

While much of the data collected by the Delta survey indicated positive trends in American oral health care, not all of the data was good. The survey found that 23 percent of Americans have gone two or more days without brushing during the last year, and that nearly 37 percent of adults between the ages of 18 to 24 have gone at least that long without brushing.

Flossing is another area of oral health that could stand improvement. Only four out of 10 Americans, 41 percent, flossed daily, and 20 percent don’t floss at all. The survey found a strong link between reporting good oral health and flossing daily.

Be Sure to Brush First

On the lighter side of topics covered by the survey, Delta found that 33 percent of Americans request their partners brush their teeth prior to a kiss. Women were far more likely than men to request a pre-kiss brushing, said researchers.

If you have questions about dental care for you family, then please contact the best choice for SW Portland family dentists: Southwest Portland Dental, today!