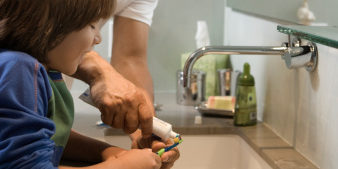 While a child’s baby teeth eventually fall out and are replaced with permanent teeth, they still play an enormously important role in the long-term development of a child’s oral health. Baby teeth act as space holders that help to guide adult teeth into position once they begin to form. Children who lose their baby teeth at too young an age have an increased risk of suffering from a variety of oral problems, including crooked, crowded, or misaligned teeth. Considering the important role baby teeth play, parents need to take the time and make the effort to clean their kids’ gums after every feeding, and brush their teeth once they emerge after meals.

While the American Dental Association had previously recommended parents use a small amount of toothpaste containing fluoride when brushing their child’s teeth, concerns over excessive fluoride exposure have caused the ADA to revise their recommendation for how much young children should receive.

New guidelines issued by the ADA now ask parents to reconsider how much toothpaste they squeeze onto their kid’s toothbrush in an effort to limit fluoride exposure.

The Risk of Fluoride Exposure

Most dentists typically apply prescription-strength fluoride treatment to patients’ teeth as part of cleanings, as fluoride has been proven to reduce the risk of cavities through a process called re-mineralization. However, for younger patients, fluoride exposure increases their risk of fluorosis, a cosmetic condition that causes teeth to appear brown or spotted.

Fluorosis only occurs when young children receive excessive exposure to fluoride. To limit fluoride exposure, the ADA previously recommended that parents only apply a pea-sized drop of toothpaste to their child’s toothbrush prior to brushing. Since younger children have a hard time not swallowing toothpaste during brushing, the use of a limited amount of toothpaste containing fluoride would reduce the potential exposure. However, the ADA has now reconsidered the appropriate amount of toothpaste parents should use.

A Little Goes a Long Way

Instead of a pea-sized drop, the ADA now recommends that parents use a “smear” of toothpaste when brushing the teeth of children under the age of 3. When a child gets older and can better control his or her reflex to swallow, parents are then once again encouraged to use to a “pea-sized” amount when brushing.

The change comes after the ADA reconsidered how much toothpaste parents needed to use in order to reduce their kids’ risk of tooth decay, while not exposing kids to an increased risk of fluorosis. The ADA now feels confident, however, that a smaller amount of toothpaste will still provide enough protection for kids’ long-term oral health to no longer warrant the risk of excessive fluoride exposure that previously existed under the old guidelines.

If you have any questions about how much toothpaste to use when brushing your kids’ teeth, feel free to ask your family dentists in SW Portland, Drs. Jarvis or Goldwyn during your next appointment.